A few years ago during a trip to North Carolina to visit my sister, we visited Cat Angels Pet Adoptions, an organization in Cary that rescues felines from kill shelters and off the street.  That’s where we found Luna, the most well-adjusted, contented two-or-four-legged creature I’ve ever met.

Luna was a beautiful black cat who had never had a home outside of the shelter. She’d been rescued off the streets and had lived at Cat Angels for close to three years, happily playing with the other cats in a brightly-painted large room filled with  catnip-filled toys,  soft beds, and gently-worn scratching posts.

While at the shelter, Luna developed breast cancer not once, but twice, and had undergone two mastectomies. She had a big, pink, downy patch on her tummy where the fur had never grown back and each of her paws had a graduated amount of white from her front right paw, which looked like she’d dipped one toe in white paint, to her back left, which had  a full white boot.

She was the happiest cat I’d ever met. My sister and I were dumbfounded that no one had adopted her. Maybe they’d been scared off by the chance the cancer may recur.  Or maybe Luna was waiting for my sister, knowing they were meant for each other.

Luna, who my sister renamed Cosette (and quickly shortened to Cosi)  fit in perfectly with Jeannie’s two other cats and she brought a radiant joy to each day. Nothing ever seemed to daunt her.  Jeannie gave her a great home, but it was clear that Cosi was just one of those creatures blessed with the ability to bloom where she was planted. 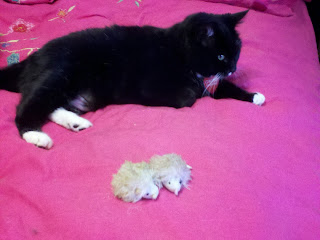 She loved to play with all kinds of things, but she loved her little stuffed hedgehogs best of all. Every night, after Jeannie had gone to sleep, Cosi would prowl and howl as she collected her three “hedge babies,” as we called them. She would usually bring them to Jeannie or, if she really liked one of Jeannie’s house guests, she would bring one to them. There was no greater honor than to wake up and find a hedge baby deposited by your bed or outside your door. It meant Cosi loved you and had deemed you worthy. Either that or she wanted you to babysit.

After a little more than two years with Jeannie, Cosi’s cancer came back and she died very quickly without suffering last January. There was no time to even consider any treatment, but I’m not sure Cosi would have wanted any. Her spirit seemed to know it was time to leave.

When I would visit, I would often marvel at Cosi and her sweet wisdom and think she was like the lilies of the field mentioned in the Book of Matthew that “neither toil or spin.”  She had been through, by most barometers, some harrowing stuff: living on the street, two cancer bouts, being without a forever home for years, and yet she was as happy as could be and totally in whatever moment was in front of her. Give her a box that was two sizes too small for her to squeeze into and a sunbeam and she was good to go.

So today’s $10 donation is in honor of Cosi, who died a year ago today.  Wherever she is, I have no doubt she is very happy and that she has an endless supply of  hedge babies.

Read why I started this blog here.