Jellyfish are taking over the world

I didn’t need today’s story on CNN to tell me that jellyfish are taking over our beaches.

When I was at Topsail Island in September, I had to watch where I put my feet when walking on the shore for fear of accidentally stepping on a jellyfish. I’d never seen as many at one time before. I luckily didn’t see any when I was in the water, but when I was on the pier, would look down in the waves and see them.

So, apparently, this was not isolated. According to CNN, beaches the world over are overrun with the stinging creatures because of overfishing and climate change. In Hawaii, there have been days when 1,000 people were stung in one day caught in jellyfish clusters or “blooms.”

And it’s not just humans that are having issues. Incredibly, last month so many jellyfish got inside a nuclear plant in Sweden, leading operators to shut down the reactor. In Ireland a jellyfish bloom stung thousands of salmon to death.

Most of the jellyfish species in North America are harmless, despite the pain of the sting. Not so elsewhere. The big box jellyfish is Australia is one of the world’s most poisonous creatures, following by a jellyfish the size of a thimble. That doesn’t seem like a fair fight.

The scientist interviewed in the CNN story doesn't see any way back from the jellyfish explosion. That's not good news for those of us who love nothing better than swimming in the ocean.

This jellyfish and my feet almost had a fateful meeting at the beach. I don't know if they can still sting if you step on them when they're dead, but I'm glad I didn't find out. 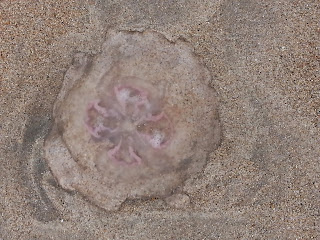 Email ThisBlogThis!Share to TwitterShare to FacebookShare to Pinterest
Labels: Cause and effect, CNN, jellyfish, Melinda Newman, My Year of Giving Daily, Ocean Conservancy