My dad died yesterday. In October, he had been diagnosed with colon cancer that had already spread to his lungs. The prognosis was six months or more, but he clearly had other plans. All along, we’d hoped that his failing heart and kidneys would kill him before the cancer took hold since it would be a much easier death, and, like most things in life, my dad did it his way.

On Sunday, after it was clear that he had taken a turn for the worse (or worst, as it ended up being), I took the red eye to Raleigh from Los Angeles.

I landed at 6 a.m. Monday and went straight to see Dad. He had already decided that he didn’t want to go to the hospital. The nurses at the continuing care facility he had lived in for the past 12 years were able to administer any drugs he needed since the emphasis moved from any kind of treatment to comfort care.

Monday, he was fairly conversational as he drifted in and out of sleep, but he said he felt very confused. At one point, he piped up and said to me, “You know what would make me feel less disoriented? If we played some poker.” I grabbed a table that could swing over his bed, and a deck of cards, but in the time that took, he was too tired to play.

My sister and I traded off being by dad’s side. I came home to grab a few hours’ sleep and Tuesday morning my sister called. Dad had woken up at 3 a.m. asking for our mom, who died on Christmas Eve, 2007. Jeannie thought I better come back.

Dad believed he was on a ship. It had left from Germany (my father was German, but grew up in Shanghai before going to boarding school and college in England, and then immigrating by boat to the U.S.) He wanted to know if we’d crossed the English Channel yet.

He looked at me and said, “It feels like we’re barely moving.” I told him that’s because we were in very calm, smooth seas. He asked, “When are we docking?”  I told him we could dock whenever he wanted to. He said, “I hope it’s soon.”

The next 24 hours were filled with friends, ministers, and staff from the facility where he lived coming by to hold his hand and cradle his head and tell him how much they loved him.

One of the things that I admire most about my father is that he treated everyone the same. He was just as friendly, if not more so, to the wait staff at the facility where he lived, than to the executive staff. Much of the kitchen and janitorial staff was Hispanic, so dad learned Spanish so he could talk to them more easily. We’d often be tooling down the hall over the years, me on foot, dad in his scooter, and someone from the laundry room would go by and Dad would shout out “Como estas, Luis?” And ask about Luis’s wife and children in his broken Spanish.

He had many prayers by people of different denominations said over him as the hours passed and each one was more poignant than the last. I was raised Presbyterian, and our WASPy prayers, as lovely as they are, can’t hold a candle to the ones the African American aides delivered. They were filled with praise for God as Dad traveled Home. They were beautiful, enriching prayers, celebrating Dad’s passage and his life and his love for his wife and daughters. One aide, originally from Kenya, lifted Dad up with her mellifluous sing-song voice, conjuring up his ancestors to accompany him on his journey.

On Monday, Dad and I had decided that I would take his place for Tuesday’s poker game, which the gentlemen played down the hall (here’s the background on the poker gang). I didn’t feel like I could leave him for long, so instead, I decided I would play two hands with the men at the beginning: one each of his two favorite games. We got through one hand and my sister said Dad was fine, but I needed to come back to his room.  Curled up on the bed with Dad was Abby, the beloved Jack Russell terrier who had helped us usher Mom on her way in 2007. By now, Dad was fairly unresponsive, but he put his hand on Abby’s head and she stayed still as he gently pet her. After more than 20 minutes, her mom lifted her off the bed. Abby would not leave Dad on her own accord.

During their break, six men, some of whom had been playing poker with Dad for 40 years, came in to say goodbye. Jeannie and I left to give them some time alone and though the door was pulled nearly shut, I was surprised and deeply moved to hear one of the men leading them in prayer. The door opened and as they filed out, the gruffest one had tears in his eyes as he hugged me, shook his head, and said, “I can’t take this.”

While Dad hadn’t acknowledged their presence, a few hours later, he started saying the numbers “three” and “six.” My sister, an aide who felt Dad’s kindness had kept her going while she underwent cancer treatment, and I were trying to figure out what he was muttering. Finally, I asked him if he was working on the perfect low hand in poker and he said, “yes.” That was one of his last words.

Around midnight, he became totally unresponsive and his breathing changed. My sister and I kept holding his hand and kissing his forehead and swabbing his mouth, so he wouldn't get thirsty. It is an immensely profound thing to watch someone as he enters the final stages of life, in some place between this world and the next. The physical body doesn’t want to let go, even if the soul and spirit are ready. For the next several hours, we told Dad he could go, mom was waiting for him, we loved him and we knew he would always be with us. Different staffers came in throughout the night to attend to him and to tell him goodbye.

A number of the nurses had mentioned to us that he might be waiting until we left the room to die, so we started stepping out more and more. Yet he lingered.

Late Tuesday morning, one of his favorite aides decided to shave him. I was afraid the razor’s buzzing would bother him, but Jeannie reminded me that he always loved to be freshly shaved before they would go to church on Sunday. Mary Ann lovingly and thoroughly shaved away four days of stubble. Then as she got ready to bathe him, Jeannie and I decided to go away for the longest time we had left him since Sunday and went down the hall to the cafe to get some lunch.

As we headed back to his room, I think we both knew that Dad would be gone when we got back. He was shaved, he was washed, he had taken the final step to be presented back to God. We opened the door and his body was still warm, but his spirit—what made Dad dad—was no longer there. He probably died no more than five minutes before we got back.

When the coroner came, he left us alone to say our final words. After telling Dad that we loved him, my sister and I sang to him a song he’d made up when we were little about a big, fat cat named Dingbat. Every time we would sing it together when we were young, Jeannie and I would giggle in that delightful, unself-conscious way that little girls have—and all daddies love— waiting for Dad to deliver the perfect end to the song, which he always did.  This time, we sang his part. It was time to say good bye. He’d taught us all he needed to. 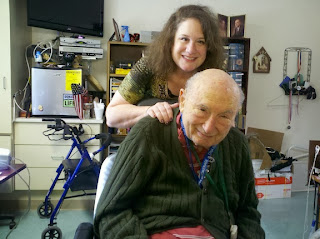